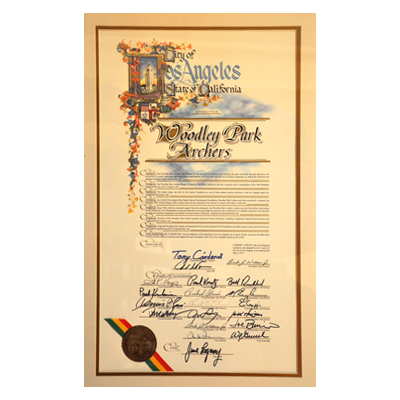 On Wednesday, May 2, 2012 the Los Angeles City Council at its council meeting, honored the Woodley Park Archers for the club’s contribution to the City of Los Angeles through its free community archery instruction program, which it puts on each Wednesday evening and Saturday morning through the volunteer service of its member instructors, all of whom are certified by the national archery organization, USA Archery.  The club was presented with a beautiful Resolution signed by the Mayor and the entire City Council.

The City Council also honored the club’s Head Coach, Don Tucci and Head Instructor, Jim McIntosh who personally lead the Saturday and Wednesday classes, along with the assistance of many of the club’s assistant coaches.

The club provides free use of equipment during each of its two hour introductory instruction classes which covers basic shooting fundamentals and range shooting safety.  There are approximately 25-30 or more new students in each class session along with an additional 25-40 or more returning students who come back to practice their shooting skills by getting additional tips and instruction from the club’s coaches.

The Woodley Park Archery Range is in the Sixth Council District of Councilman Tony Cardenas.  The Councilman learned about the archery range and after coming for an afternoon of shooting enjoyment,  was so appreciative of the club and its free community instruction program and the support given by the Easton Foundations, that he decided to award Certificates of Recognition for the enormous contribution to the community.  WPA Vice President, Wayne Shaphran and Head Coach, Don Tucci accepted the awards on behalf of the club, its members, instructors and Easton Foundations, and expressed their gratitude to the City Council for the recognition. 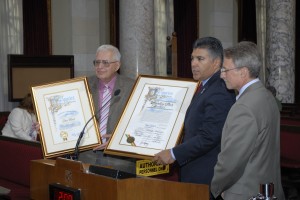 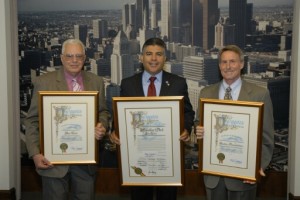