If you want to try something truly fun, historic and liberating, try Clout archery. Clout shooting is long distance archery which simulates the loosing of arrows in medieval warfare at an approaching army 100 – 200 hundred yards away. 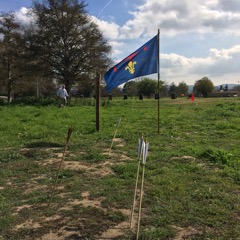 The term comes from the Old English word “clut” meaning a “piece of cloth” and in Middle English “to strike”. The sport most likely evolved out of the practice of shooting at long range targets to prepare for battle.

Today, clout shooting is an activity in which arrows are shot in the air at a pole or flag of varying distances, generally up to 185 yards away. At Woodley, we shoot at targets at distances of 100, 150, 185 and 200 yards or beyond. The object is to hit the target or come as close to it as possible.

It is open to all archers shooting traditional equipment including longbows, recurves, horsebows, yumi bows and warbows (no compound bows or crossbows). Many of the members make their own arrows, bows, and accessories.

The distance an arrow will fly is a function of many variables, including the bow’s draw weight, draw length, type of bow, weight of arrow, size and shape of the feathers, wind, and very importantly, shooting technique. You don’t need a heavy bow to shoot the Clout. Although many of the team members shoot very heavy medieval warbows (100-160 pound pull) even a light 35 pound longbow with the right arrow and technique, can hit targets out to 185 yards.

The Woodley Clout shoot has been a tradition at the range for decades, with new people trying each week. We meet the first and third Sunday of every month at 9:00am, and generally shoot for 2-3 hours. It’s free, and you will get a chance to examine and try out a variety of bows, arrows and traditional equipment, and learn from some of the top shooters in archery, many of whom have done shooting for film and television including The History Channel, Westworld, and Man at arms: Art of War.

Come join us and have fun!